Leaving Milano, some hours in Lisbon, evening in Funchal 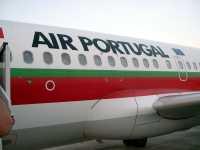 Milano Linate: the plane is going to take-off to Lisbon 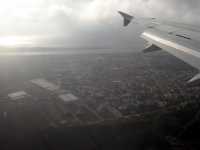 Under me, the first houses of Lisbon 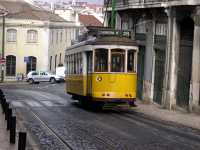 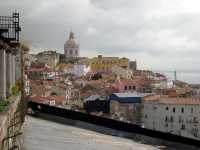 Gray sky over the capital of Portugal 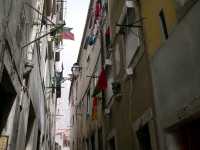 Washing and flags hanging in the Alfama streets 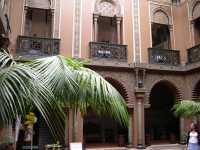 A view of the patio in casa do Alentejo (Palácio Alverca) 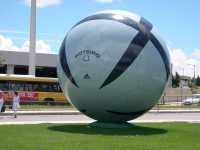 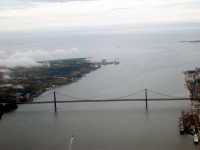 The 25 Avril bridge viewed by the plane, after take-off 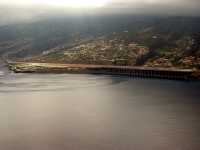 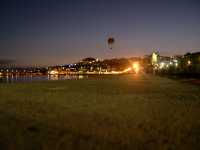 The thousands of lights of a sultry Funchal, when the night is coming
After a very long and precise planning, the most careful I've ever done for a trip, now it's finally time to leave to the Azores.

Flight TP 829 to Lisbon is waiting for me (?) for his take-off, hopefully at 6:45 AM at the button, from international Linate Airport in Milan. Landing is scheduled, after almost three hour flight. First destination the beloved capital of Portugal. Thanks to different time (one hour less) I'll arrive at 8:30 AM.

Arriving in Lisbon by plane is a strong emotion. Is my fourth time in Lisbon but the first one by plane and, also if is not so clear, I can recognize, or maybe I just believe to do it, Praça do Comércio, the Baixa, the Belem tower, the Jeronimos monastery.

The flight is on time and the, as soon as I can, I go to take the bus shuttle, called Aerobus, that connect the Portela Airport to downtown Lisbon. My baggage, is what I think, is waiting for me somewhere ready to go with me to Madeira in the afternoon. Only half an hour and I am in the middle of Rossio.

It'about ten 'o clock and the weather is grey. Rain is more then a simple threat, first drops make their apparition, not even shyly.
It's a pity. But I don't let this discourage me. I know already hot to move in Lisbon, what I want is to breathe the atmosphere once again. Then? What is better than a nice walk in the regular street of the Baixa to Praça do Comércio, the big square. Walking I think about my program for the day and I choose a wise one without risks of losing the flight.

When I arrive at my destination, my ideas are quite clear. I have rejected the hypothesis Belem tower for his high risks (too far).
Better to walk up to the Alfama, against the rain and the come dowe with an electrico. In the meantime rain become harder and then the call of pasteis de Nata that I can't eat in Belem reaches me. It comes from Martinho da Arcada, the historical cafe that was also refuge for Fernando Pessoa. Together with the sweets I drink a 'bica' looking at nice azulejos inside the cafe.

I go out with a better feeling and the weather seems to reflect my improved mood: the sun certainly is not shining but the rain is barely perceptible for sure not able to stop me.

The tramp through the twisting streets that cross the middle age quarter, passing close the Cathedral is quite fatiguing. A view from Miradouro shows me a cloudy Lisbon but equally fascinating with ships ploughing rio Tejo water, today very dark. From the top, i walk down by the steps of narrow 'becos' in Alfama, between cats and washing hanging to dry with many portuguese flags. No one, correctly, has put them back after the unexpected defeat in the Football European Championship against Greece.

I go back, up to the main street and I wait patiently the '28', the little tram so typical arrives in a short period and, unusually, maybe for cause of the weather, is not full of tourists. The driver is a woman. This surprises me a little and tickle the erotic fantasies of a Lisbon guy who, doing enphatic gestures to the woman, expose himself to the risk of going down (to the tram, not to the tram driver). In the traffic jam is hard to move but, after the descent to the old Terreiro do Paço the glorious Electrico brings me close to Largo do Chiado.

Dutiful stop for an hommage to Pessoa native house and a same dutiful stop to the 'Brasileira', the very famous cafe where the poet, who was very often sitting at those tables, is reminded by a bronze statue in the posture so familiar to him. I refuse the temptation represented by salgados, dangerous for my appetite, ad I take just another one bica, the strong coffee. In fact I start to become hungry, then I decide to walk in the direction of the restaurant. The choosen one is inside the casa do Alentejo where, I will not miss the 'Porco à Alentejana' (Pork cooked at the Alentejan way, with clams and potatoes).

When I arrive at Casa do Alentejo is too early for eating, tha I avail myself of the opportunity to look around. The club of Alentejo has the seat in Palácio Alverca close to Rossio, a XVII Century building. There is a bright patio in a style that seems to me the Manuelin one. Is very rich and with arab reminiscence. Everywhere are plate remembering famous people from Alentejo. Famous, but not for me. Finally is time to eat. I sit in the restaurant and, in the beginnning I'm alone, soon I see many other customers, mainly portugueses with the attitude of habituées. Meal absolutely traditional starting with a 'caldo verde' and after the coveted Porco all'alentejana, with the unaccustomed joining of pork meat and clams.

It's time to go back to the airport, I wait for a tenth of minutes the bus and, after the short trip between the new part of Lisbon made of large streets with many squares, fountains and statues, I'm again in Portela. Here I reach to post my first article (in Italian) on my blog. Punctuality doesn't happen often and then, this time, the flight to Funchal is on late. More than one hour late. It's not a big problem. I wait. The flight is quite. Quite funny the landing in Madeira. The aircraft proceeds parallely to the airstrip built by the sea and then make a 180° turn causing some thrills.

When I arrive my suitcase is not there. Same problem for other people coming from Rome. After waiting in vain also the next plane from Lisbon, the employed of lost property office, a girl tells me that my baggage is in Porto and guarantees the delivery for the night directly to my hotel. This is a problem. I hope they will keep the promise because I have to go to Azores in the afternoon of the next day. I keep calm, it would be unuseful to be agitated and I wait for the events.

Shuttle connecting Madeira Airport to Funchal is much lesser efficient than Lisbon one. I had to wait almost one hour. At the end, finally, it comes. Airport is far 25 kilometres from Funchal. The road goes up and down that seems very difficult for the little bus. Sea at left side, hills at right and large gorges crossed by high bridges. The view reminds me of the highway to Catania near my hometown, Messina, in Sicily. In that case, there are not those terrible slopes. The bus seems to be going to explode. But it gains to much trust in the descents done at a worrying speed. The longest is probably built over a torrent, brings down to Funchal seafront. Helped by a french guy that has a Finchal map, I go down at the right bus stop, only 100 metres from the hotel I reserved.

I explain my baggage problem to the receptionist, I do my best with the hotel bathroom set and, of course, without changeing my dress I walk downtown Funchal for my first evemimg in vacation. The climate is sticky, I do not like it and I hope i will be not the same for all the vacation. Maybe the bad feeling is increased by absence of my things. There are many tourists, many of them, according to me, are british. Close to my hotel there is a luxury pub promising all the matches of english premiership on a big screen. Inside there are tenth of people with white hairs.

Funchal is not bad, a multitude of light over the hills make the views absolutely fascinating. Just for a case, I am in a part of the town that seems to be the oldest with houses and churches in colonial style. All the buildings are white but a lighting maybe excessive makes them almost yellow. I decide that my tour is over for tonight and at random I choose the place where have the dinner. All the places are tragically touristic, but I want eat something before to sleep.

The day was long and intense and now I'm a bit tired. At the end, the dish of fish is quite nice. But I keep on considering the climate very oppressive, and I star to think that, if this is the usual climate, the percentage of crazy people here is probably higher than the average. Almostn trying to confirm my thesis, from the inside of the restaurant (I am on the porch), a noise becoming higher starts to come. After a little bit, a guy, seemingly drunk, come out from the restaurant and he holds a bottle in the hand in a threaty way against another customer. Few seconds and a waiter makes him quiet and brings him in the street.

I had also the show, what I want more?. I pay the bill and I walk back to the hotel. In my head thinking of exiles, tropical places, fabulous women, corruption, colonial dresses and, as musical background, a wonderful italian song: "Banana Republic". Laggiù nel paese dei tropici, dove il sole è più sole che qua... (There, in the tropics, where the sun is more sun than here..)